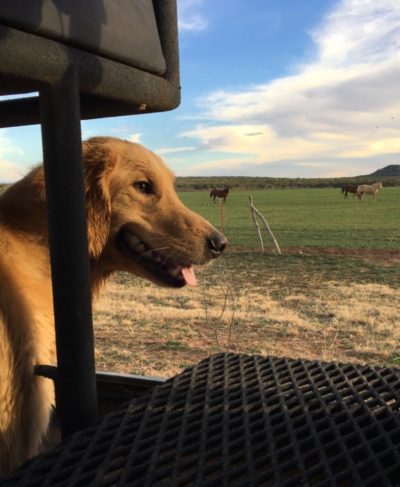 Favorite Toy: He has a collection of his babies from through the years and he loves them all, but his first Easter bunny is still his favorite.

Favorite Costume: Beaux has a strange obsession with wearing shirts/jerseys. He LOVES to wear his Saints jersey.

Best Trick: Tricks aren't Beaux's forte, but if you say "Dos Manos" he will give you both of his paws!

More scoop about me:

Beaux is a 3 year old Golden Retriever who came into our family and stole the show. He was trained in Spanish, but along the way he has picked up English commands as well so we joke that his main trick is that he is bilingual. We tried to teach him tricks like roll over, speak, etc. but since he wasn't very motivated by food he wasn't all that into it. Beaux loves the great outdoors, it doesn't matter to him whether we are roaming a ranch or just walking in our neighborhood. He also LOVES to swim and struggles with impulse control when he sees a body of water, or mud, even if it's just a puddle! He hates to have his picture taken, but he always has the biggest smile on his face! Beaux definitely leans heavily to the quirkier side. He enjoys a good bath tub soak followed by hair drying. He prefers to sleep with his head on a pillow, and 75% of the bed, couch, chair or whatever it is he is laying on. He watches tv, especially sports and animal shows. You never have to guess how he is feeling because his facial expressions always tell it all! He loves to sit and animal watch squirrels, lizards, birds, and all other animals but he is most obsessed with our neighbors cat named Spunky. If you ask Beaux where Spunky is and you let him go, he will run to our neighbors house to look in every window he can see, then he checks under the cars and in the tree. In the same pattern everytime, unless he happens to find Spunky. If he does then he just hangs back and stares at Spunky and waits for Spunky to come to him. If he's lucky, Spunky will get close and occasionally they touch noses. He has an intense collection of stuffed animals that he clearly treats as his babies. He greets everyone that comes over with a baby in his mouth, but retreats quickly if people try to take the babies from him. Most people assume he is bringing them a toy or that he wants to play tug-o-war, but that couldn't be further from the truth. He does not share his babies well with humans or other animals and he has been known to hide them on higher ground when certain dogs come over to play. He also has a favorite chair in our house and is known to plop himself on top of anyone who happens to be sitting in it and makes himself right at home!